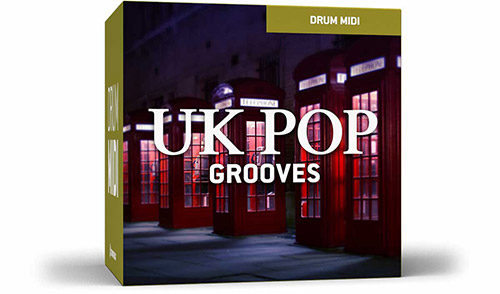 THE BRITISH BEAT.One of UK’s most in-demand session drummers lays down the groove.

Having played with some of the most noted artists in modern pop history, performed on best-selling records like Adele’s “21,” recorded 52 Top 20 albums, resided as the house drummer for UK’s “The Voice,” graced covers of magazines and received numerous awards, session drummer Ash Soan has been the session drummer in the lens view of British pop for the past few decades.

This collection of grooves and fills draws inspiration from a myriad of songs, where Ash took the basic foundations and merged, twisted, turned and tilted them to come up with a broad palette of variations. Expect a wide range of fundamental but still inventive drum beats, all with that British twist.

When stars like Adele, Robbie Williams, Cher, Ronan Keating and James Morrison need a solid groove, they call Ash. The next time you do, you know where to look.

Drum MIDI grooves and fills inspired by modern singer-songwriterand pop from the UKPerformed by Ash Soan4/4 in straight and/or swing feel with tempos ranging from65 BPM to 145 BPMIntro, verse, pre-chorus, chorus, bridge and fills sections