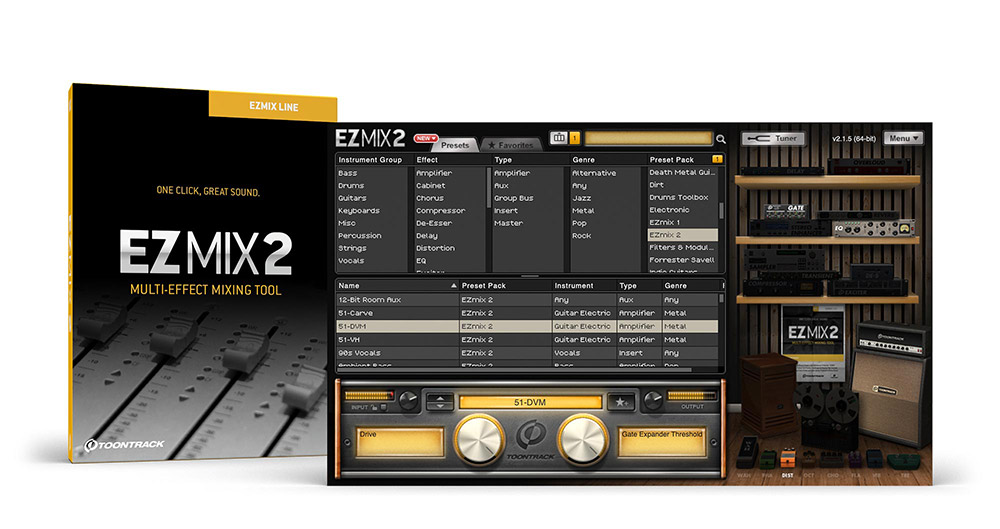 EZmix is a simple, yet powerful mixing tool that gives you access to a huge array of mix presets for the whole gamut of mixing needs. Whether you need to mix drums, vocals, guitars, bass or keyboards this is your tool. Simply insert EZmix on a channel strip in your sequencer, and pick a preset to apply to your audio source. Done. In addition, EZmix comes with a standalone host that you can use to practice your guitar with using the included amplifiers and cabinets simulations. Of course, those are available when using your recording application too.

EZmix 2
Following the success of Toontrack’s EZmix, the new and completely overhauled EZmix 2 continues to build on the same fundamental idea: having pro-designed effect chains for instruments and channels found in every recording session combined in one powerful mixing tool. With the vast collection of ready-made presets, mixing music is not only easy and incredibly fast you end up with results second to none.

All the previous functionality and content from EZmix is still intact and working in EZmix 2. The major difference however, is that the new and revamped version comes with settings based on high-tech mastering effects, new reverb algorithms, guitar/bass amp and cab simulation, a completely revised interface and a large core content boost. Essentially, EZmix 2 is a mixing engineer, mastering suite and guitar/bass amp all rolled up into one package. Start mixing – it’s EZ

Effects
EZmix 2 is a powerful package that combines a multitude of quality studio effects with the know-how of professional engineers. As soon as you select one of EZmix’s pre-designed settings, a complex chain of effect units instantly loads seamlessly in the background. See Details for in-depth information.

The professional touch
Making professional mixes has never been easier Having a vast array of available effects to choose from, the signal-chain settings in EZmix 2 and all EZmix Packs were carefully crafted by seasoned mixing engineers. Lend some pro secrets and platinum record magic to your music by letting seasoned veterans do the tweaking for you

Guitar/bass amp and speaker simulation
EZmix 2 has a large amount of ready-made settings based on some of the most classic vintage and contemporary guitar and bass amps, speakers and stomp boxes. Whether you are working stand-alone or in a host plug your instrument straight into your sound card and select a preset

Low CPU usage
Combing several plugins on multiple channels can slow down even the fastest computer. With EZmix 2 you only use ONE instance on each channel instead of MANY and end up reducing your CPU usage to a minimum. With EZmix 2 you can make flawless mixes on low resource systems or in mobile situations