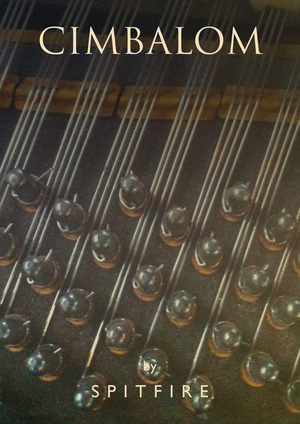 First there was the harp, then the harpsichord, now Spitfire are please to introduce the Cimbalom to this family of definitive VIs.
The cimbalom is a concert hammered dulcimer: a type of chordophone composed of a large, trapezoidal box with metal strings stretched across its top. It is a musical instrument popularized in Hungary and commonly found throughout central and eastern Europe. The cimbalom is played by striking two beaters against the strings. The steel treble strings are arranged in groups of 4 and are tuned in unison. The bass strings which are over-spun with copper, are arranged in groups of 3 and are also tuned in unison.

The cimbalom has been used in many film scores over the years famously John Barry used it in the title theme for the film The Ipcress File, as well as in the main theme of the 1971 TV series The Persuaders!. But it’s most famous, and coolest use was probably on the 1994 Portishead track “Sour Times”. An example of how the instrument can be used as a mournful exotic sound not just it’s often stereotypical use against East European backdrops, spy intrigue and cold war thrillers. Aside from being an amazing featured or solo instrument. It is also great as a textural element; doubling pianos and other tuned percussion instruments, it’s particularly interesting in unison with pizzicato passages. A fantastic new colour for your palette and with this level of deep sampling, something that can sit proud and exposed in your mixes and honestly and realistically express the emotion of your composition.

Spitfire are delighted to present Greg Knowles playing his Grand Cimbalom in the hall at Air Studios, London, one of the greatest recording studios in the world. Sampled with 4 round robins and 2 dynamics as single hits, and of course the characteristic tremolando. (Its not a massively dynamic instrument but we have smoothly enabled you to make it as dynamic or not as you wish, via front panel velocity map.) Options exist to use ‘Piano’ sustain pedal style, or the reverse authentic ‘Cimbalom’ style (where pedal up is the ringing out sustained sound). Recorded through the finest mics via exclusive Neve “Montserrat” Pre-Amps and Prism AD converters. The Spitfire Cimbalom joins our Harpsichord and Harp as the definitive VI in its class. The Cimbalom is presented with 4 mic positions (Close, Tree, Ambient, Outriggers) and is designed to be used in conjunction with a full version of Kontakt 4.2.4 or Kontakt 5.