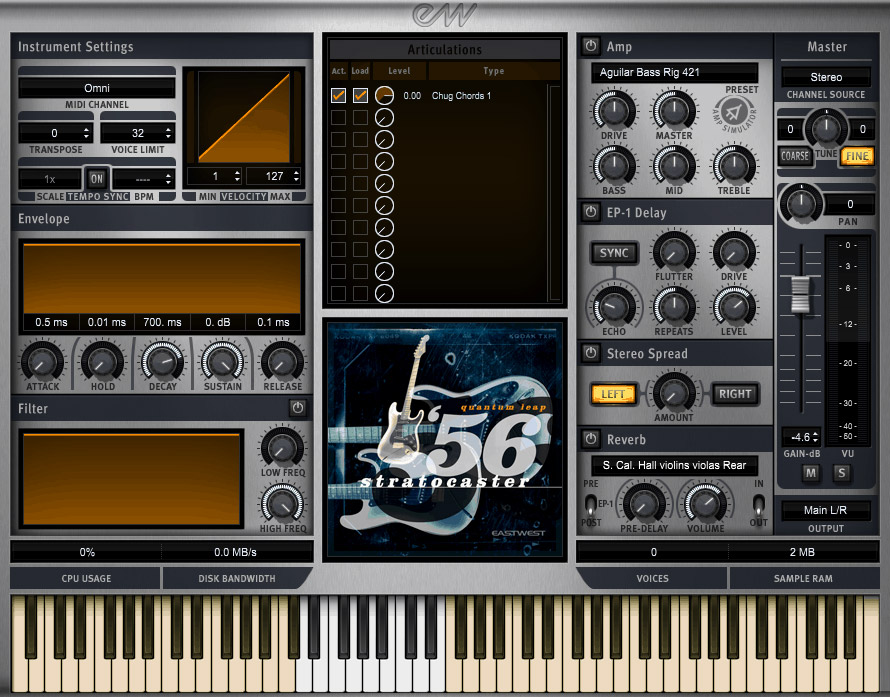 The stratocaster is world renowned as one of the all time greats. It’s a very versatile guitar and been used in music genres such as rock, country, pop and jazz to name just a few. If you don’t own this guitar which 99.9% of us don’t can a sampler VST emulate you playing a real guitar. Well East West have certainly attempted to give you the ability to get as close as is physically possible in the box. Whilst this is not my favourite guitar East West have to offer it’s certainly a sound bank I will use if I need a strat in the session.

The Strat 56 library contains a lot of great patches some of which can be found in another product called Goliath. In all honesty if you have Goliath you have the East West strat 56. Goliath contains all the best most used patches minus the key switch patches within it. You get a ton of extra patches with Goliath too which are all pretty awesome.

The library includes a lot of different variations as well as key switches and using the variations available you can get incredibly close to sounding like a real guitarists whilst playing keys. The key switch patches are great for keeping in one instrument and key switching from sound to sound obtaining a lot of instant variation.

Once you find your groove in midi, you can explore the possibilities the East West Play software has to offer. This takes a single sound and turns it into thousands of possibilities. Play has a multitude of function, many of whist only become apparent when you open the FX window in the mixer section. On the face of the Play instrument for Strat 56 you will find an envelope used for shaping your sounds, a filter both high pass and low pass used for removing unwanted frequencies such as rumble, stereo spread which actually works incredible well with this strat 56 sampler, an EP-1 delay and amp and reverb. I would personally recommend avoiding the reverb and amp that is built into the front panel and switching to the reverb and amp simulator in the FX section. Reason being is they are exactly the same in the way they sound but you gain more control over the parameters in the FX section.

Using such processing as the built in amp simulator you can emulate the strat running various different amps. personally I’m not too keen on how the strat sounds through these amps but they have their uses and are there to use if you so wish. Another option is to run the strat through the built in Omnicide distortion plugin. Which take sound design to a very dirty and yet subtle realm. It can be used to great effect on the strat. Personally it’s not something i would use on a strat but used subtle you can achieve a very pleasing sound.

The built in SSL channel strip and bus compressor as always work incredibly well with the start and all instruments and sounds for that matter. The built in SSL channel strip can be used in all manner of ways. Tame your dynamics using the channel strips compressor, EQ the strat and remove or increase certain frequencies, even use the built in transient designer to obtain more snap at the beginning of each sample. I use an SSL console at Audio Animals day in day out and have a lot of knowledge on how these channel strips work and how they should sound. Whilst this emulation of the hardware isn’t in my eyes the best emulation on the market it’s certainly a very good emulation to have and use within Play to process your sound.

You need R2R PLAY/OPUS release to
ues this library.